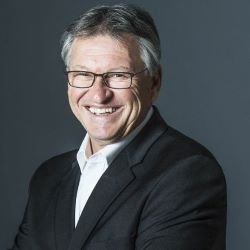 Ranked by the Institute for International Research as “one of the world’s leading practitioners” in his field, Stef grows people who get results and he helps organisations to create winning workplace cultures.

Over the past 25 years Stef has successfully delivered 3,500+ assignments on 5 continents – from keynotes through to enterprise wide culture-by-design interventions, powered by the one-of-a-kind UGRs concept. Now in use by organisations in more than 50 countries, UGRs enables organisations to build and maintain the type of culture that will ensure sustainable success, whilst also making it a great place to work.

Stef continues to lead UGRs interventions while also writing and speaking on the topics that drive change, improve performance and boost results, like: employee engagement through self-mastery and motivation; authentic leadership; trust-based teamwork; and the “nuts ‘n bolts” of how to improve workplace culture.

Having earned every award and accreditation in professional speaking, there can no doubt about Stef’s ability to influence people to do more, be more and have more – at home, work and play. From a troubled childhood spanning 8 schools, Stef was drafted for military service mid-way through South Africa’s 23-year Bush War. With nowhere else to go by the time his conscription ended, he joined the regular Army. Soon, he earned the rare distinction of being commissioned from the rank of sergeant to full lieutenant – remarkably, with exemption of the otherwise compulsory year-long internship at the Army Officers College – later becoming one
of the youngest lieutenant colonels in the SADF.

On entering the civilian sector, he continued to serve as an active reserve volunteer for another decade – through South Africa’s transition into democracy – to ultimately become the decorated commander of an elite Parachute Battalion. As a civilian, he soon established himself amongst the top 5% of salespeople in the financial services industry, worldwide, before moving on to become an award winning agency sales manager in record time, and finally on to building his own independent brokerage.

It is this unique blend of personal experience, grounded on a solid academic foundation together with his exposure to what really happens on the workshop floors and in the boardrooms of corporations around the globe that distinguishes Stef as a catalyst capable of facilitating personal transformation and organisational change.

Clients everywhere agree: working with Stef gives them a competitive advantage through the mobilisation of a positively engaged workforce of empowered people, in turn creating an environment where everyone’s contribution counts and is considered to be worthwhile. The compound effect of this is perhaps best described by former South African President, Thabo Mbeki, who said that “Stef’s work has nation-building potential”.

For having met the highest standards of professional integrity, and in recognition of global experience and excellence. A mere 31 speakers (from a worldwide membership of more
than 3,000) have received this accreditation.

Speaker Hall of Fame (HoF)
From: Professional Speakers Association of Southern Africa In recognition of outstanding overall levels of success in the fields of speaking, teaching and consulting.
There are fewer than 200 HoF inductees alive today – and only 16 in South Africa.

Lifetime Achievement Award
From: Speakers inc. The first of only 3 recipients of this peer-voted industry award (2008).

Founder’s Award
From: Professional Speakers Association of Southern Africa This is the highest award of the PSASA, recognising role models in the speaking industry. The ultimate honour was when the PSASA named this award ‘The Stef duPlessis Founder’s Award’.

Perhaps most relevant at this time is the fact that, with the advent of Covid, Stef has made a significant investment in building a broadcast-quality studio. Over the past months, he has presented online sessions for audiences the world over – and whilst it is his message that counts most, delegates from everywhere comment that the ambiance of the studio further connects them with him. On that note, here is feedback from one such session from an engineer in France. Consider that: and engineer, in France – so we’re dealing with a non-nonsense, no touchy-feely personality. He wrote:

“… I am not sure I can pass on my state of mind after watching Stef’s webinar and re watching & dissecting it… I can say that this has been a lifetime turning point for me. Watching Stef, I thought “this is very real & from the heart”. Am I going to be able to transform it all into meaningful actions… only time will tell but I took notes enough to always be able to go back to it again & again. There aren’t many conferences I qualify this way or which I stick to watching all the way, and then capture notes and review them again. Passing this type of emotion through the screen is pretty impressive.”  Stéphane COUDURIER CURVEUR, Industrial Process Performance EXcellence, Injection Senior Manager, Faurecia – Interiors – Central Manufacturing.