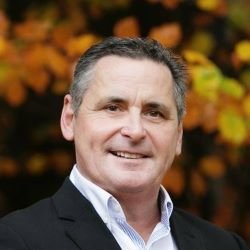 Steve is one of the country’s leading experts on grassroots sales and marketing strategies. Not a theorist or a guru, but a doer.

He left school at the age of 16 with no direction or real qualifications to speak off. At 18 he became engrossed in the power of personal development and goal setting. At 19 with a fresh attitude and determination to succeed he found his niche in sales. Shortly thereafter he was invited to become a director of his first company.

Since then he has owned and operated businesses in the UK and USA. He has taken them from start up to stock market flotation.

He helped grow his last UK business from scratch to £30 million in annual revenues in just 8 years, becoming one of the “Times Top 100? fasted growing and profitable SME’s in the country in the process. In 2005 the company was sold and he was able to retire at the age of 45.

Now he spends much of his time working with organisations, sales teams and entrepreneurs that want to achieve growth and success through improved sales and marketing. Numerous businesses can point directly to Steve’s low cost or even no cost strategies, that once implemented have delivered incredible results; and quickly too.

His specialty; helping people achieve champagne results… on a beer budget! Steve, is a business columnist for a number of publications and author of “How To Thrive Not Just Survive”, in which he shares his simple proven formula for business success. He willingly shares his knowledge in the hope that he will inspire others to achieve their goals and aspirations. In addition to sales training, mentoring and coaching, he has lectured at Universities and is engaged as a keynote inspirational sales and marketing speaker internationally.Over recent months Steve has delivered talks and worked with companies all across the UK and Europe as well as The Middle East, South Africa, Australia, New Zealand and India.

Steve is also very proud to be a member of an elite team of business mentors chosen by The Entrepreneurs’ Business Academy (the EBA) which James Caan, former Dragon from BBC TV’s Dragon’s Den spearheads with Founder, Bev James.

Steve lives by his mantra…

“It’s your attitude that determines your altitude”