The consequence of all the economic issues is that I believe our society faces a difficult period. The economic situation will be very difficult for many and it will not impact evenly or fairly.

As is well covered in the media we face a cost of living crisis. The worst since the 1950s. But it’s not just a cost problem, it’s an income problem too. Regular pay after inflation is down 1.2 per cent in real terms. As covered in my articles on inflation I think there is a high risk of a wage price spiral developing and consequently inflation continuing higher and longer than the Bank of England expects. That will be painful.

The real challenge that I think is yet to fully emerge is that the pain is not being spread evenly. Let’s start with a bit of economic theory. In my article about inflation I comment about how economists recognise that Quantiative Easing (QE) inevitably leads eventually to inflation as we are seeing now.  Economists also recognise that QE benefits asset holders through inflating the value of their assets but doesn’t benefit income earners who’s income reduces in real value.

Turning theory into practice just look at the stock market and house prices over the last ten years to see this in action.  Those owning shares and houses have done pretty well!

And sadly it gets worse. I have discussed in previous articles how many of us saved large amounts of money during the pandemic so have lots of savings to spend. Remember Roger Martin-Fagg’s hosepipe analogy. Put the foot on the hosepipe during the pandemic and the pressure builds up.  Release the foot and the water gushes out.

The more subtle problem is that evidence is now visible that the ability to save was much higher for those who had more to spend on luxury products and services they couldn’t get during the pandemic. If all your money prior to the pandemic went on food, rent and energy then you didn’t save much and you were more likely to be furloughed too. So the more wealthy are heading into this inflationary period with an even greater ability to weather the storm than normal. 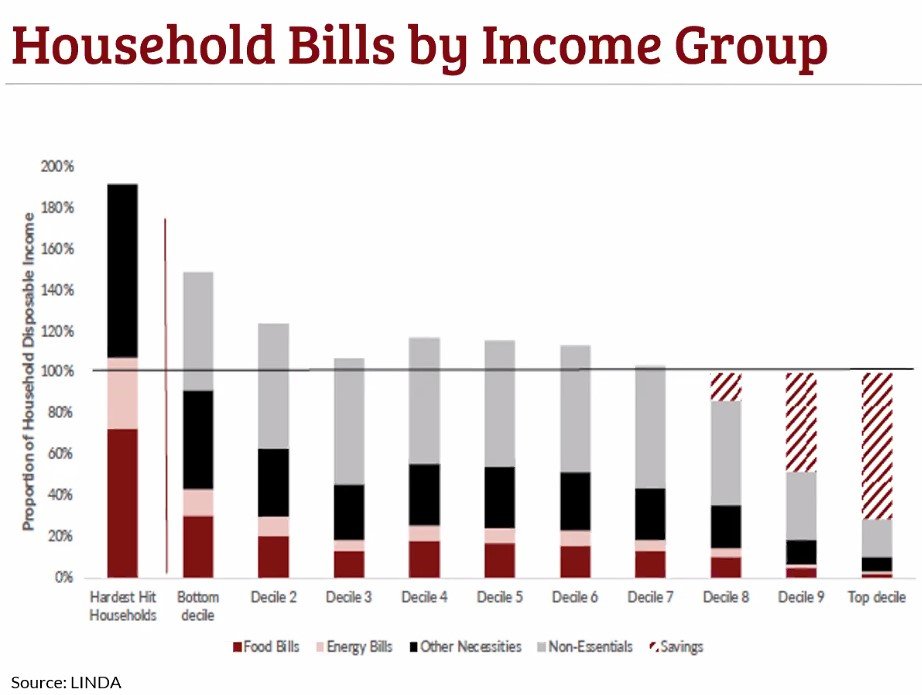 And sadly it gets even worse than that. Not only is the general ability to weather the storm of inflation very differentiated, the specific drivers of inflation we are seeing (energy until now and food likely to be hit next) reinforce that differential impact. Increases in the cost of food, fuel, transportation and housing most hits those who spend most on those things – the poor and middle class workers. This is well illustrated by this graph.

Notice how the lowest two deciles spend most or all of their income and more on food and energy. They have no savings and no slack to cope with inflation. EY forecast credit card debt will rise 7.9% this year. At first sight odd when overall we have been saving large amounts. 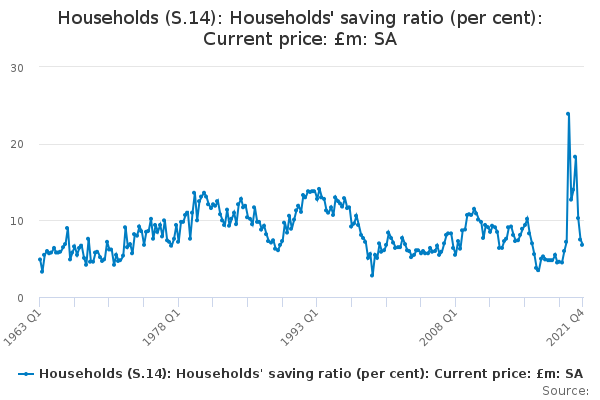 Sadly the combination of these two graphs suggests that there is an increasing gap between those with savings and those who were already spending all their income on food, rent and energy and who are now facing large price hikes they are trying to fund on credit cards. It is notable that streaming services, possibly a luxury for the bottom demographic, are for the first time showing a decline in subscriptions.

And finally there is also, as I discuss in the employment article, an increasing gap on the income side too. Whilst the shortage of labour is creating pay pressure across the board the pressure is, as always, greatest where the staff are most valuable and most short.

So the more skilled, more flexible and more mobile workers are likely to have the greatest negotiating power. Again, whilst the low skill basic worker is likely to get some pay rise, they probably be to the same degree as others. The evidence for this is just emerging.  The ONS reported that in the year to March workers in the Finance and business services sector received a 10.7% pay rise whilst those in manufacturing 4.1% and Construction 6.9%.  They also reported public sector staff receiving just 1.6%.

In summary I think there is going to be an economically problematic increased differentiation between:

I make that observations, not as a political commentator, but as an interested and fairly economically literate business person interested in how it might impact business. Because I think these differentials will create challenges that will affect businesses… and opportunities if we look hard enough!

You can see it already in the motor industry. The Society of Motor Manufacturers and Traders reported last week that production was down by 100,000 cars. OK you might say. No surprise given the shortages. But notably the luxury car market is up by 16.8%.  So what’s happened? The manufacturers have of course focused on using whatever supplies they can get to make the more expensive and more profitable models.

I imagine the same is happening in other industries. And from a business perspective, it should be. Looking at the opposite side of the coin, have you noticed how despite the inflationary supply chain pressures the supermarkets are trying hard to manage inflation pressures on price and are cutting their cost base to do so. Has anyone else noticed how Sainsbury’s are busy sharing their store space with other franchise brands.  That has to be a way of cutting the net cost of a store.

Sadly then it is clear from a number of angles that people with money, assets and savings, typically people like us business leaders in senior positions in the public and private sectors, will not be directly hurt too much whilst others will face real life challenges as energy and food costs increase rapidly.

It seems to me almost certain that despite the endeavours of the government to ‘level up’,  the crisis will widen the gap between rich and poor further.

I have heard reports of some really shocking responses to the crisis.  People in social housing asking for gas to be disconnected to avoid standing charges and even removing the heating systems from their homes. The extreme fear is that people will begin collecting and burning scrap wood in unsuitable and dangerous ways.

Whilst such actions sound extreme, I am old enough to remember the 1970s and 1980s and how social tension can, with the help of a little political momentum, translate into unpleasant social disruption, especially in a hot summer. As mentioned earlier, the Stagflation combination of inflation, recession and unemployment was a key contributor to the riots across the UK in 1981 (Read more here) and twelve years earlier when inflation and demands for pay rises led to the Winter of Discontent. (Read more here)