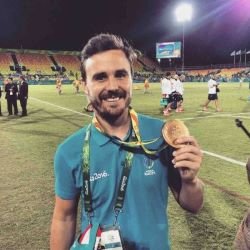 A ‘millennial’ who led social media activity for the Rugby World Cups and around the globe in five continents on the HSBC World Rugby Sevens Series and in so doing, re-invented the Rugby World Cup as a social and cultural phenomenon, no longer a ‘mere’ sports event.

– BA/Hons degree in Philosophy
– PG Diploma in Journalism, specialising in sport
– Currently founder of own company ‘Wired Social’ with clients including UEFA, Google and World Rugby
– Currently working on a social media strategy for rugby sevens and its debut in the Olympic Games in Rio