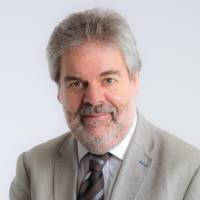 Michael Dodd is an international communications-boosting speaker and one-time broadcast journalist who helps managing directors, chief executives and their teams convey their message – face-to-face, through the news media and on the web.

Having been trained in the art of asking “blowtorch-on-the-belly” questions as a reporter his native Australia, Michael now helps participants give great answers to them.

He tests out “volunteers” in Q and As and conducts “makeovers” on them to help everyone in the audience stand up to tough questions from clients, prospects, journalists, officials team members and others.

Michael’s had face-to-face speaking engagements on six continents – and does speaking events virtually for audiences around the world.

He’s been awarded the “New Speaker of the Year” title from the Academy for Chief Executives.

Michael’s book “Great Answers To Tough Questions At Work”, published by Wiley, has been given “Management Gold” endorsement by the Chartered Management Institute after it was shortlisted for the Management Book of the Year Award.

The Daily Express declared that “Every briefcase and bookshelf should have a copy”. Michael has recorded the talking book version for the Amazon company, Audible.

His work as a communications-boosting speaker and media interview coach draws upon his experience as a foreign correspondent in Europe and a political reporter covering the one of the world’s toughest democratic arenas – the Australian Parliament in Canberra.

He speaks with audiences of business leaders, sales teams, United Nations’ officials, diplomats and civil servants to give great answers to tough questions in media interviews and in other professional conversations.

Michael’s been Berlin Correspondent and London Correspondent for the Australian Broadcasting Corporation and has filed reports from and about all the major European countries and the United States. He covered Eastern and Central Europe before, during and after the 1989 revolutions for the ABC, the BBC World Service and Radio New Zealand. He interviewed the leader of the Solidarity Free Trade Union Movement, Lech Walesa, in Gdansk while he was leading the Solidarity Free Trade Union movement which helped overthrow European communism. Michael questioned Vaclav Havel during the Velvet Revolution in Czechoslovakia before his rise to the country’s presidency.

Michael’s been interviewed as a commentator on Sky News, the BBC, Al Jazeera and done hundreds of TV newspaper reviews. He’s presented Five Live’s “Global” program. He has worked as a Senior Lecturer in Broadcast Journalism at the University of Westminster.

Michael is a Fellow of the Professional Speaking Association and served two terms as President of the Association’s fast-growing London Region.