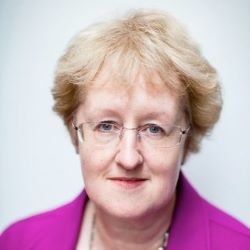 Lesley has a portfolio of Non-Executive Director, consultancy and other roles.

In October 2014, she was appointed as the first ever Chair of DVLA – the UK Driver and Vehicle Licencing Agency, which is responsible for maintaining over 45 million driver records and 37 million vehicle records. It collects over £6 billion a year in Vehicle Excise Duty and employs 5,000 people.

She is also a Non-Executive Director of:

In addition, she is a Consultant and Coach with Architelos, a Panel Member of the RUSI Independent Review of UK Surveillance, a BCS Policy and Public Affairs Board Member, an ICANN ccNSO Councillor and a Speaker for Schools.

Lesley was previously the CEO/MD of Nominet, the registry for .uk Internet Domain Names, roles she held for over a decade. Under her leadership, Nominet became the award winning trusted guardian of a vital part of the UK Internet, providing services relied upon by millions of businesses and consumers.

She was made OBE, for services to the Internet and e-commerce in 2011 and has a Masters Degree in Business Administration (MBA) with Distinction (1997) from Bristol Business School, University of the West of England.